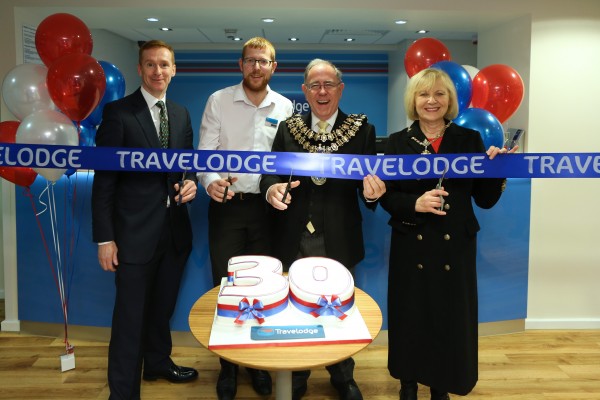 Travelodge also announces expansion plan of seven new hotels in Greater Manchester that will create 200 new jobs in the area.

Greater Manchester’s first budget hotel brand, Travelodge, is celebrating its 30th anniversary in the county this week and to mark this milestone, the company has opened its first hotel in Stockport town centre – in the landmark building, Regent House.

Travelodge, one of the UK’s largest independent hotel brands, opened its first Greater Manchester hotel in 1987, on the M62 at the Birch Eastbound services. Over the last three decades, the hotel chain has expanded across the country and now operates 19 hotels – which include five properties in Manchester city centre and hotels in most of the Greater Manchester boroughs.

Tony O’Brien, Travelodge UK Development Director said: “We are delighted to be celebrating our 30th anniversary of trading in Greater Manchester by opening our first hotel in Stockport’s landmark building, Regent House. Over the last three decades, Travelodge has become famous across the county for offering unbeatable value and making travel affordable for everyone, which has helped attract more business and leisure travellers to the area.”

The hotel represents an investment of £5 million for the landlord and has created 30 new jobs within the local community.

It’s also located within walking distance to the train and bus stations, giving easy access to Manchester city centre and across Greater Manchester.

A champagne reception was held to celebrate the opening of Stockport Travelodge where the Mayor of Stockport, Councillor Chris Gordon joined Tony O’Brien, Travelodge Development Director, who was born and raised in Greater Manchester, to officially open the hotel.

Mayor of Stockport, Councillor Chris Gordon said: “As a regular customer of Travelodge, I welcome the company’s first hotel in Stockport and I was delighted to be asked to officially open it as Mayor.  I appreciate the positive statement of trust in the renewal of the Town Centre by this major investment by a respected national company, which will greatly contribute to the economy of the borough.”

Stockport
← Stockport is on the up as BID vote is a yes! Safestyle UK moves in to Stockport's Grosvenor House →