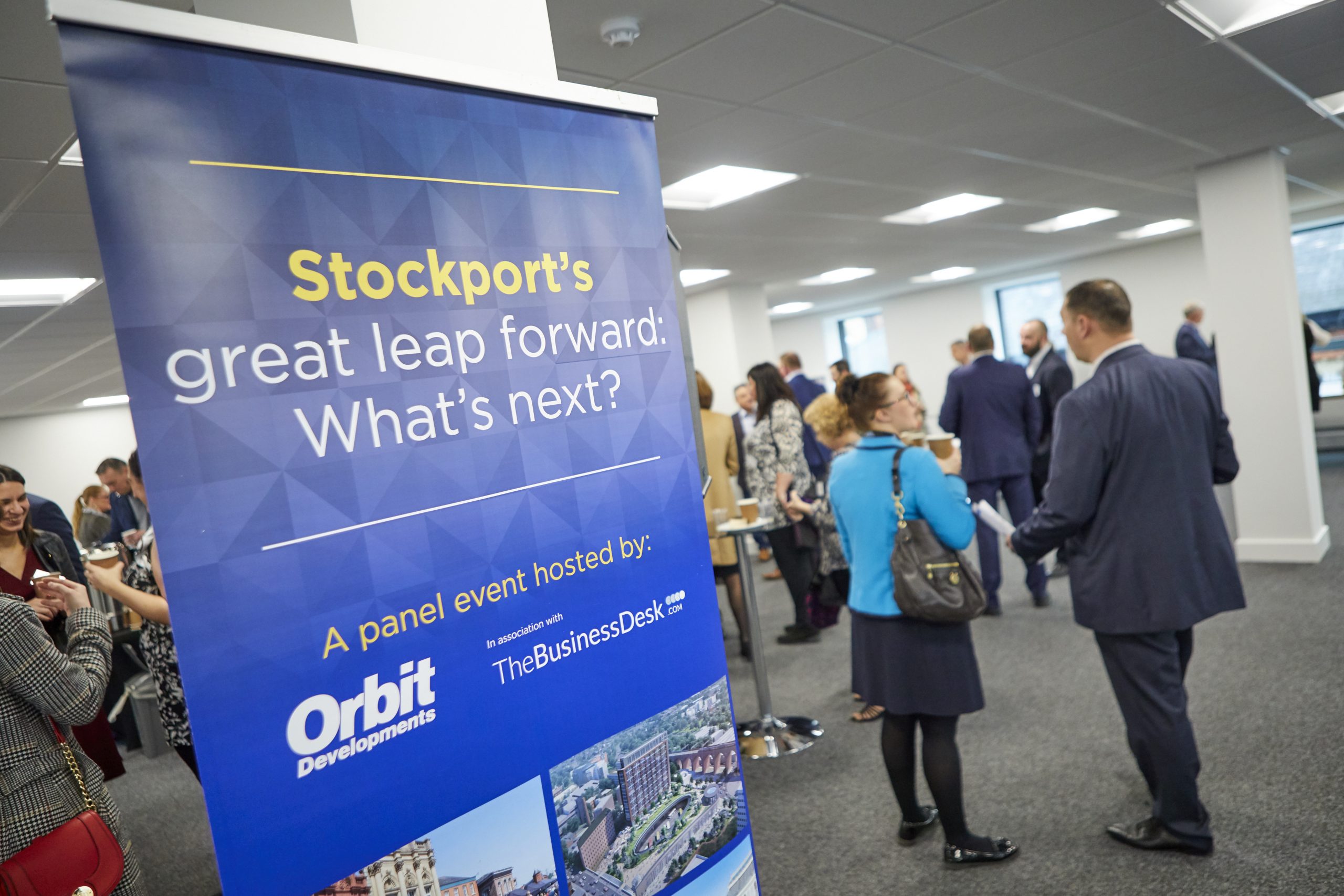 You have to be bold and brave, so said Paul Richards today, Service Director, Development and Regeneration at Stockport Council when asked what he might say to others on Stockport’s great leap forward.

He was commenting at a business breakfast yesterday hosted jointly by Orbit Developments and media partners The Business Desk at 1 St Peter’s Square in the town which attracted over 90 attendees from around the region.

Boldness could certainly be used to describe the Council’s approach in recent years to investing its own resources to create markets and conditions where others can thrive and its call has been met by multiple stakeholders, many represented at the event.

Rhys Owen set the scene by reporting three years of record take up around the 12 properties owned by Orbit – the town’s largest commercial landlord  – a clear indicator of the progress the town has made.

Others agreed and all shared the view that it is a success story – ‘in pockets’ said Paul Richards – with more to come.

Pockets of success include The Light Cinema at Red Rock, which is the top performing cinema across the UK Group, with sales 25% up, and the Holiday Inn also doing well, beating 240 other Holiday Inn hotels across Europe for customer service and footfall.

The team behind the BID – business improvement district – campaigning now under the brand Totally Stockport was also praised for its fantastic work in the town centre.

Steve Oliver from Music Magpie, who moved his HQ into Stockport Exchange, one of its first tenants, spoke about the massive visible improvements around the station and the wider town.

Alluding to what is still to come he described progress as half way there. His view was shared by Neil Pottinger who said while the direction of travel was sound, long-term success would be defined across many more measures. Caroline Patten agreed. “We need more and better data,” she said,   “which will give us a benchmark to judge achievements, but we should be really proud of what has been done already.”

One of the biggest challenges in changing perceptions is getting the word out – strongly and often – to the right audiences. Neil Pottinger from Starkeys, whose business is based in Hazel Grove, was asked what he had heard of developments. He said: “We tend to reach out so I think we are quite well informed, but I think there is more could be done.”

Steve Oliver agreed saying that his staff tended not to see any updates on Stockport events so there was room for those already in the town centre to make sure their colleagues were the first to know and ask them to let family and friends know, a view supported by Caroline Patten who said word of mouth was key.

Progress in residential development was a hot topic for discussion, especially around attracting young professionals. The Council’s Paul Richards outlined a number of short and long-term projects including work around a 138-acre site just outside the town centre bringing together all stakeholders to develop 3000 new homes in the next 10-15 years, offering the latest in green, innovative town centre living and family accommodation.  Stockport is one of only three such projects in the UK.

Other residential investments getting airtime at the session included the Old Sorting Office on the A6 – where Rowlinsons are developing 119 apartments to let which will be available next year- including an innovative, living green wall. A first for the A6! Rhys Owen commented that perhaps more could be done to signpost these investments as evidence of the next phase of change for Stockport.

The panel was also invited to consider whether employees would be happy with a business move into a town centre like Stockport. Steve Oliver from Music Magpie said that there had been wholesale improvements in people turning up for interviews, staying with the company and that was due to all the usual things like commute time etc, but was being impacted on better facilities outside the offices. “But we have still to crack the after work piece.”

Paul Richards picked up on the theme of night-time economy commenting: “It is a nascent market but the green shoots are there.” He referenced the imminent opening of the new Food Produce Hall in Market Square which will provide a high quality casual dining experience for 150 people and work done by pioneering owner and chef Sam Buckley at Where the Light Gets In. He added: “We are also making progress at mass market brands like Zizzi at Red Rock which are really performing well.”

Last but certainly not least Steve Oliver brought some hard commercial realities to the session saying that one of Stockport’s big benefits was office rental rates versus Manchester city centre and the significant savings that could be made. Rhys Owen said that investments by Orbit and others to improve office environments meant that there was at least as good quality accommodation to be had for a lot less.

Caroline Patten added that coupled with the quality of workforce available in the Borough and the willingness of employers to meet and exceed Manchester salary packages, it was a win / win for Stockport.

Steve Oliver from Music Magpie had the final word when asked about the three key things to say about Stockport to a potential incoming business. He summed it up as cost, connectivity and culture.

He concluded: “There is a growing vibe here in Stockport which is attracting people to live, work, entertain, pioneer and succeed here. A great leap has been made, but the best is yet to come.”