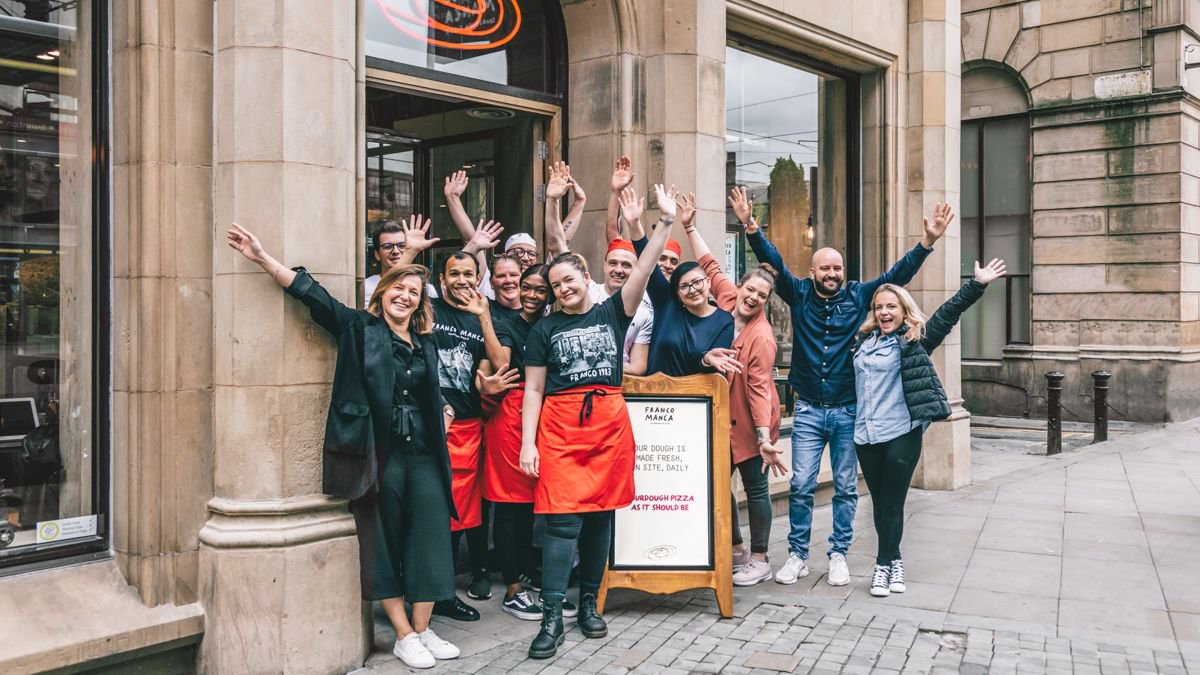 Month one has flashed by for the sourdough pizza pioneers Franco Manco who have made their Manchester base in 3,650 sq ft over the ground floor and basement at Orbit’s Cobden House on Mosley Street.

Brimming with history the building was designed in 1839 by architect Edward Walters and is a fitting spot for a pizzeria as its architectural features were inspired by Italian palazzo style.

It’s the very first Manchester pizzeria for Franco Manca who marked their launch in the heart of the city at the end of September by donating pizza to local homeless shelters and food banks.
One pizza was donated for every Neapolitan-style pizza enjoyed by customers in the first two weeks of opening, who also benefited from a considerable early bird discount with every pizza just £5 to buy.

Emiliano Ruzzu, Franco Manca’s Manchester Head Pizzaiolo said the offer had worked brilliantly and the team had served hundreds of pizzas in the first two weeks and donated same to people in need in the city.

The slow-rising sourdough, hand made on site every day, is unique to Franco Manca who were the first to introduce it to the UK market. It dates back to the late 18th century and was first procured by the pizzeria’s founder, Giuseppe Mascoli, near the city of Naples.

The recipe still honours the ingredients and methods that make the age-old style of Neapolitan pizza unique, delicious and world-renowned.

Emiliano Ruzzu again: “We are very excited to be bringing our delicious sourdough to the city of Manchester. It’s the perfect new home for our Neapolitan pizza.”

Mark Hanna, Senior Retail Leasing Director at Orbit Developments said he was delighted to welcome Emiliano and his team into Cobden House.

He said: “Both Orbit and Franco Manca invested heavily in the area and Franco Manca will absolutely benefit from a good, high profile location on Mosley Street, fronting Piccadilly Gardens at the heart of Manchester’s transport hub.

“I’m pleased to see they have made an impact with their unique pizza offer, and it’s great to see them supporting the local community with their generous donations. We wish them continued success.”

Franco Manca joins a raft of new city centre retail occupiers for Orbit over the last few months, with The Slimming Clinic due to join Cobden House on 4th November.

There is office space available in Cobden House for anyone looking for a city centre location with three individual suites on first, second and third floors currently vacant. The building has 24 hour access, air conditioning throughout with raised floors and parking. For more information contact Orbit on 01625 588200.