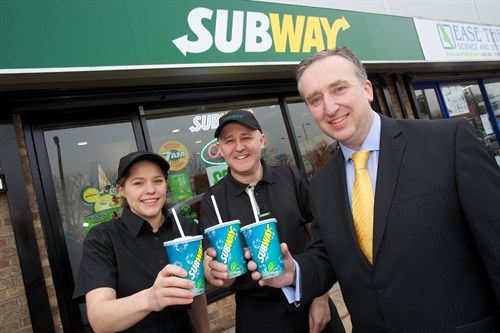 SUBWAY ® is the latest global brand to take retail space at Cheadle Hulme Shopping Centre which is owned and managed by Orbit Developments. The addition of SUBWAY® makes the shopping centre fully let.

The world’s largest sandwich provider is the second big brand to be attracted to the shopping centre in recent months following the opening of a 2,500 sq ft Costa Coffee in October last year.

The sandwich unit has seating for 24 across a customer area of 1,000 sq ft and is owned by Manchester based entrepreneur Paul Whibley and is his sixth SUBWAY® store in Greater Manchester.

He commented: “I’m delighted to be adding to my portfolio and opening my sixth store at Cheadle Hulme Shopping Centre. The centre has been serving the community for over 40 years and has the right kind of connection with the local community.”

He continued: “The retail unit features light and bright modern décor and I’m looking forward to welcoming customers to the store”.

Carl Worthington Director at Orbit Developments commented:”SUBWAY® is a great addition to the shopping centre which provides customers with a varied mix of retailers from a supermarket to restaurant and more. We wish Paul and his team every success in his new venture”.

Those in search of a tasty Sub will be able to visit the storefrom 7am – 10pm Monday to Friday, 8am – 10pm on Saturdays and 9am -10pm on Sundays.

SUBWAY® currently has over 2,000 stores in the UK and Ireland, with more than 43,000 stores worldwide in 110 countries and has more locations than McDonald’s. Cheadle Hulme will be the 156th store to open in Greater Manchester & West Yorkshire territory.